About Us Our Story 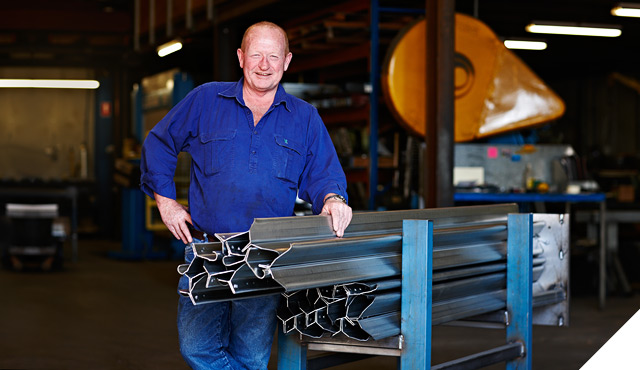 Born and raised on a cattle farm in Victoria, Neil French has been a farmer his entire life. An engineer and manufacturer for over 30 years, Neil knew there had to be a better solution for rural fencing. Only too aware of the problems farmers experience with fencing and keeping livestock, he set himself the challenge to create a fencing system that addressed every issue and pain point – a fence unlike anything else available.

Neil was unsatisfied with the performance, lifespan and sometimes toxic and dangerous nature of conventional fencing and fencing materials.

Pine, concrete and galvanised posts weren’t up to standard.

Pine posts take time and labour to point and eventually rot in the ground. Concrete posts are bulky and time consuming to install and will also corrode over time. Galvanised posts last a bit longer but are still susceptible to corrosion and particularly in extreme soil conditions and harsh environments. Galvanised posts can also bend and crack, and the worst part is that animals can get caught and injured on sharp edges.

With experience, know-how and ingenuity, the design was developed.

Over a period of five years, Neil created over 30 prototypes, testing each one on his own farm until his design was perfect. Roll-formed from one piece of material, the unique round-edged design of his posts are stronger than others on the market, and with no sharp edges to get caught or cut on, are also safer for animals.

With the strength of steel and a longevity unlike anything else seen before, ZAM® was the perfect material for Neils rural fencing system. Coated with a mixture of Zinc, Aluminium and Magnesium, ZAM® is a high-tech material that’s self sealing with incredible corrosion resistance in the harshest conditions. Some of it’s benefits include;

Neils next challenge was manufacturing the posts on a large scale. Neil had a custom roll-forming machine built in Brisbane and then brought down to his factory in Bayswater, Victoria – SteelTuff posts are now rolling off the production line.

To compliment his revolutionary posts and complete his vision, Neil has developed a fully integrated fencing system with slide on brackets, versatile and easy-to-fit strainer sections, flexible gating options and more.

Quicker and easier to install than anything else available, the SteelTuff system saves farmers time and labour.

Building and strengthening local industry for a better and brighter future for all Australians is very important to the SteelTuff team. Manufactured in Bayswater, Victoria, SteelTuff is proudly made in Australia, by Australians, for Australians.

It’s unlike anything you’ve seen before.

SteelTuff posts are built tough and guaranteed to last.

Getting a quote is quick and easy. Contact us today.

Our experienced team is here to help you with any enquiry.

Buying SteelTuff fencing is easy. Email us at info@steeltuff.com.au or call us on 1800 783 381. View the SteelTuff price list and product range here.

© Copyright 2012 SteelTuff. All rights reserved.  |  Privacy/Terms of Use  |  Email Subscription  |  Contact Us